Recommendation: The Scribbler's Guide to The Land of Myth 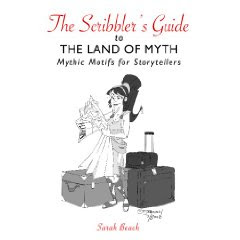 I first heard about The Scribbler's Guide to the Land of Myth because the author, Sarah Beach, and I are both fans of Janet Batchler's blog. I've really enjoyed getting to know the folks who hang out around Jan's site, and Sarah is one of them.

But the topic piqued my interest because of course, I'm a scribbler, and since I deal with fairy tales, myth and archetypes are a topic of perennial interest to me. So I bought Sarah's book. I assumed the high price was because it was a small publisher: I was not prepared for the 400+ reference tome that arrived in the mail from Amazon!

I could not have been more delighted with the Scribbler's Guide. It is a fantastic reference guide for any writer who dabbles in myth. I suspect the fantasy writer might need something more arcane, but for a contemporary novelist like myself, this book was perfect, a great way to bring depth and symbolism into my writing.

With copious references to many contemporary and classic films (Sarah's background is film/television), Sarah examines mythic elements ranging from the Hero's Journey to Archetypes to the Seven Deadly Sins to Mother/Father Figures to Symbols ranging from Fire to Autumn to Twins to Strength. Helpful mythological and historical references are included throughout. Sarah's Christian faith is operative in this book as she examines the mythological and symbolic significance of Christ, King David, and other Biblical figures.

For those interested in story structure, Sarah covers the Hero's Journey in depth, including an analysis of the differing versions (Joseph Campbell's, Christopher Vogler's, as well as five others), plus her appendix includes notes on the Anti-Hero's Journey, The Grail Quest Journey, Maslow's Hierarchy of Need, and other narrative structures. I can't think of a better tutorial or overview of the different quest narratives available to today's writer.

This book was a fascinating read, and one I know I'll be sending young and experienced writers to again and again. If you're a writer of any genre, pick up The Scribbler's Guide before you set off to write your next novel. For a reference book, you can't beat the price, and most reference books aren't half this much fun. Don't leave home without it!
Email Post

Sarah said…
Thank you so much for the wonderful review! It is always such a pleasure to know I did my job, and that it helps another writer find insight into his or her own works.

For those who are interested, I've started a blog where I will do shorter analyses of archetypes and motifs in newer films and television shows (and a few books will be thrown in). It can be found at www.scribblersguidetomyth.com/blog/.