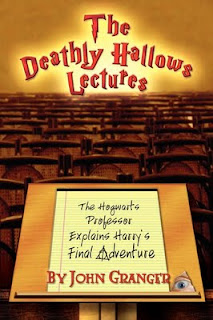 If you love Harry Potter and really loved Deathly Hallows, then this is one book you'll want to get your hands on. Hogwarts Professor and homeschool dad John Granger has produced his seventh book on Harry Potter, fittingly enough, centered around Book Seven: The Deathly Hallows Lectures: the Hogwarts Professor Explains Harry's Final Adventure. Also fittingly, it contains seven essays on the literary and symbolic aspects of Book Seven, ranging from horcruxes to hallows.

Warning: for serious fans only. If you have questions or concerns about the Harry Potter series, I highly recommend the book that changed my mind on the subject, Looking for God in Harry Potter, also by John Granger. But if you've read and relished the world's most famous Septology several times, then this book will help you go deeper, and in some places, is just as fun to read.

There are essays on the significance of faith in the book: how the entire book pivots on Harry's nearly supernatural decision to trust a man who he now knows is flawed and fallen. The question of what role Christianity plays in the book is thoroughly and wonderfully examined from a faith-based perspective. There are some interesting speculations on the relationship of Snape's Lily to Dante's Beatrice. Mirror symbolism, the three levels of meaning of the book, the role postmodernism plays in Rowling's storytelling, and examining certain high-profile symbols such as triangles and eyes are additional fascinating pieces to read. Granger rounds off the book with 31 questions submitted by fans on his website, http://www.hogwartsprofessor.com/.

And (most interesting to me) in the first two chapters, John Granger follows up on the exegesis he began in Looking For God in Harry Potter: the use of alchemical patterns in the book which in some ways determine the plot. In this way, Harry Potter, like Shakespeare's plays and Dicken's novels, follows an alchemical outline which turns on the purification, washing, and transformation of a human soul into spiritual gold. If you devoured Granger's theories on this subject in his earlier pre-Book-Seven analysis, you won't want to miss Essay 2: The Alchemical End Game.

I enjoyed this book over several summer evenings with tea and a comfortable chair, and it was delectable reading. I highly recommend it for everyone who feels that Book Seven was a triumph of storytelling. This book will give you more insight into why and how.
Email Post

Anonymous said…
Do you know what page in Shadow of the Bear Blanche is remembering when she saw the 'princess girl'?
I really need it to use in a devotional on my blog (full credit to you and your book for the paragraph).
August 11, 2009 at 7:08 AM