Toys: Setting the Parameters of the Imagination 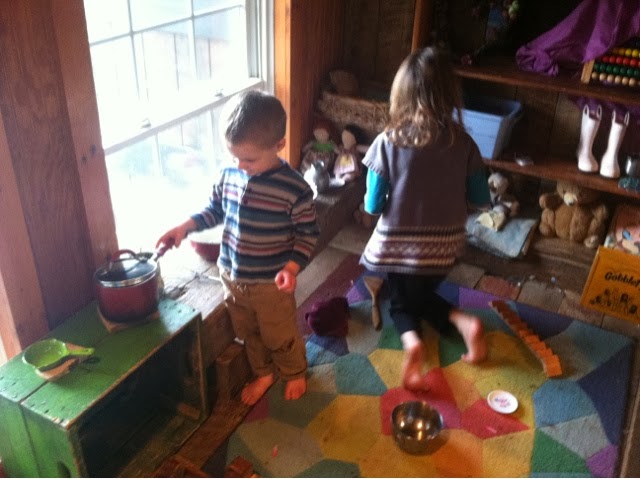 For ideas on teaching/entertaining toddlers that don't involve expensive educational toys (which often have long shelf lives), try visiting a Montessori classroom or visit Montessori N'Such or Montessori Services on the web.
Maria Montessori, a Catholic educator, believed that children learn best when they "work" at play -- learning to do things that are useful as well as fun. For example, children learn how to pour by pouring beans from one small glass pitcher into another one (an exercise I recently introduced to Caleb, which engrossed him for an hour). Other activities include spooning walnuts from one basket to another with a spoon or a pair of pinchers; twisting thick strands of yarn into a braid; stacking boxes from largest to smallest and colored sticks from shortest to longest. While some of the Montessori classroom equipment is sophisticated, some of it can be made at home, and other "lessons" use materials most of us have in our homes already (such as beans, baskets, etc.). The Montessori method would be of interest to any parent planning on homeschooling, since it helps to lay groundwork for "school" learning.
Check out books in the library on the Montessori method, such as Basic Montessori by David Gettman and Teaching Montessori in the Home(Elizabeth G. Hainstock). Another good resource is the Montessori Catholic Council for more information about Montessori's Catholicity.
A beautiful catalog of very basic and beautifully made toys can be found at www.novanatural.com. More like art than toys in some places!
Hearthsong offers toys for older children and babies that are perennial favorites and hard to find in other places. I get lots of ideas from their catalog, although I seldom buy the toys. They sell a lot of craft kits, science tools, as well as old-fashioned balls, skipping ropes, and dollhouses. Call 1-800-325-2502 for a free catalog.
Magic Cabin Dolls sells lovely, simple stuffed dolls as well as less-expensive kits that you can make yourself. They also sell dollmaking books, including Making Dolls by Reinckens, which has patterns for the lovely, simple Waldorf-style dolls sold by the Natural Baby Company. Call 1-888-623-6557 or write P. O. Box 1996, Peoria, IL 61656-3866.
Another good book, long out of print, is The Doll Book, written by people espousing the Waldorf method of teaching toddlers. It has doll patterns, as well as suggestions and guidelines for toys for different ages of children. "It's a great book so long as you don't make it into a god," said the mother who recommended it to me.

copyright Regina Doman, 1999. This document is available for republishing only after the author's permission has been obtained. Click the top button for an email link to the author.
Email Post