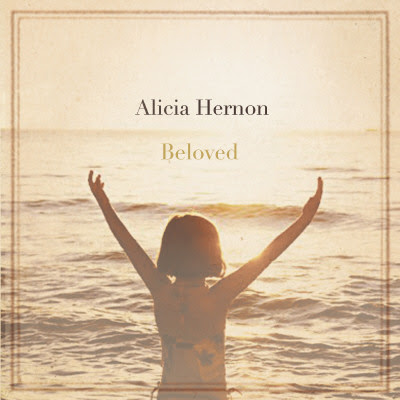 Allow me to share with you one of the great delights of my life.
For years, one of my favorite musical experiences has been to listen to my sister Alicia sing. (Alicia is two years younger than me but is taller and looks older than me, so most people assume she's the older one!) Her voice is my favorite kind of female voice -- high, strong, and clear. For years she's sung with choirs and as a backup singer for other professionals, and more than once she's been tapped as a soloist. But up until now, she's only sung on other people's CDs. If my memory is correct, I believe she's appeared as a soloist on four different albums thus far with three different groups.

But finally, she's come out with her own album, and I am so excited to be able to share her music with you. Her first album, Beloved, is now available from her website, http://www.aliciahernon.com/. Produced in conjunction with my brother Martin Doman (who sings backup and duet with her on several of the tracks), this album is dedicated to women in all stages of life, from girlhood to betrothal, from marriage to motherhood, from the grieving mother to the consecrated religious. It is, fittingly enough, titled Beloved, to emphasize that all women, at every stage of life, are beloved by Christ.
Alicia (who, unlike me, publishes under her married name, Hernon: not her maiden name, Doman) considers herself a singer, not a songwriter or composer. She surmises this by comparing herself to the various composers, musicians, and songwriters she's worked with over the years, including those she's related to. But I think she's mistaken to undervalue her talent as a songwriter, and, lucky for us, the more than half of Beloved are her original compositions. Perhaps Alicia hasn't written many songs, but the ones she has written are a handful of gems, beautifully constructed, memorable, loved by many, and sung in Alicia's unfailingly lovely voice.

Since it's not every day that Alicia produces an album, and since this one is long-overdue, forgive me if I treat you to an in-depth review of my all-time favorite singer/musician/songwriter who also happens to be my sister.

First track on the album is The Cry of the Beloved, which Alicia wrote as a mere college student but which has become a perennial favorite and even became the title track of a Steubenville conference album. It's known more popularly in some circles as "Draw Me, O King": the lyrics are based on the first chapter of the Song of Songs.
Draw Me, O King! I will follow you eagerly:
draw me, O King, to your rooms!
The love that you give is sweeter than wine:
how rightly you are loved!
How rightly you are loved!
The chorus has a sprightly melodic line, and it's been used as a responsorial psalm in more than a few weddings, including my own. :) This is the third time Alicia has been asked to record this song, and this version, with my brother Martin Doman singing backup, will not disappoint old fans and will hopefully win many new ones. My ultimate dream is to see this song incorporated into Catholic hymnals. To hear a clip, click here.

Second track, another fruit from Alicia's college years was a growth in her devotion to Our Lady. And from this meditation and love came another gem, the deceptively simple and utterly passionate song, Maria. The song's verses consist of the first parts of three of the most popular prayers to Our Lady: the Hail Mary, Hail Holy Queen, and Memorarae: the chorus contains variations on the Litany of Loretto together with the heartfelt cry: Maria! It sounds so easily constructed, but the combination is a breathtaking solo piece that few forget once they've heard it. To hear a clip, click here. To see Alicia's thoughts on this song, click here.

The third piece on the album is a duet for engaged couples, sung with my brother Martin, called The Ring. True disclosure: this song is based on a poem I wrote of the same name. I've been trying to recall why I wrote it and for whom, but shortly after I wrote it, Alicia set it to music, making it a far more beautiful creation than it was originally. This is one of the few songs that currently doesn't have a sample track on Alicia's website, but perhaps Alicia will post it soon. Here are the lyrics of the original poem, which don't quite capture the intricate interplay of harmonizing and voices that you will hear on the CD:

My sister, I ask you in this hour
Unfolding with the morning flower,
to stand with me and make a vow.
No more shall you be freedom's slave
but since your life you freely gave,
take servanthood in freedom now.
The ring, the round of eternity,
I place on your hand, I give to thee,
a symbol of your love for me.

A promise drawn out through fire and sand
Now gleams in silver on your hand
Eternity that enshrines your finger,
I stand to be yours as life is long:
clasp my hand, and be my singer.
Draw near to me and be my song.
The ring, surpassing old and new,
clings to your hand just as I do:
a symbol of my love for you.

I know I had originally thought of it as a song sung by Christ to the devout soul (hence the term 'servanthood' in the first verse) but Alicia's arrangement has been used to celebrate weddings and anniversaries, where servanthood would refer to the mutual submission found in marriage. I suppose the first verse could be sung twice, with the appellation, "My brother..." to emphasize this.

Fourth track: You're the One. I absolutely love this song, a recent composition by Alicia for her husband, Michael. This song so wonderfully captures their deep friendship and romantic love: and I know that others will see their own marriage in its easily-hummable lyrics. You have to hear it.

Fifth track: Conquer Me. I have been waiting to hear this song again for years. In 1997, when my daughter Rose was baptized, Alicia sang this song after the baptism. The lyrics are from the mystic Hadewijch of Belgium, and Alicia was so moved by them, she set them to music. Any woman, any soul who yearns for union with God, who wishes that God could overcome all the inner resistance and residue of sin and selfishness within them will appreciate this song. I'm just delighted to have a recorded version of the song I've been humming now and again to myself for these past twelve years! Enjoy! To hear a clip of this song, click here.

Sixth track: "Talitha Cumi." Alicia was kind enough to dedicate this song to me, as well as to all mothers who've suffered loss. Another duet by Alicia and Martin, this song is a poem written by a woman to her child who died. A heartfelt reflection on Christ's words to the little girl he raised from the dead. To hear a clip of this song, click here

Seventh track: Up to the Moon. This song by Kim Hill captures my sister's love for her children. Alicia is one of the most motherly persons I know, and her love of music and motherhood is manifested in her eight highly musical children and her years of teaching Kindermusik classes to young children. When Alicia sings to children, she's most in her element. But next time, I'd like to hear her record one of her own original lullabies.

Eighth track: As I Kneel. As befitting an album that has so much to say about women, children, and motherhood, Alicia included this traditional hymn to our Lady, sung with her little daughter Maggie. If you're not familiar with this enchanting song, this version is an excellent introduction.

Ninth Track: The final rousing psalm, "Give Thanks to the Lord" reflects Alicia's committment to her parish music ministry: a fellow singer set this Psalm to music for their parish Easter Vigil, and Alicia loved it so much she decided to record it. It gives the entire CD a liturgical coda, bringing us from the individual soul to the embrace of Mother Church praising her Bridegroom.

Bonus Track: Scripture Medley. Not only does Alicia teach Kindermusik, help with her parish choir, she also homeschooled for many years. In order to help her children memorize Scripture, she set several short verses to music. While this track departs from the meditative soft music of the rest on the CD, it's enjoyable to hear Alicia interacting with her children and being a mom, coaching them to give a spirited rendition of "Children, obey your parents" and "Be holy, for the Lord your God is holy." The last song, an old favorite camp song, "Rejoice in the Lord always" is a fun ending to an enjoyable solo album.

Alicia writes on her website, "by her very nature, a woman is made to give herself away." As if to emphasize this, although this CD is $18 post-paid, all profits from album will be donated to pro-life causes. So please, visit http://www.aliciahernon.com/ and take a listen to the clips. If you like what you hear, feel free to buy a copy. And please spread the word! Thanks!

Rose Marchen said…
I shall certainly check out the music clips! Thank you for sharing this with us!
May 1, 2009 at 9:35 PM