Another Way to a Wedding Dress

Years ago, I made my own wedding dress. Ever the optimist, I was determined to do it, since it was the 90s and dresses were pricey and hideous, and at that time in my life, I had little appreciation for the vintage. I modeled it on a dress worn by Marie Antoinette since I loved the style, but I had to make it out of polyester since silk chiffon was impossible to find in retail outlets accessible via mall.

Not so for my daughter, a child born in the very last of the nineties and coming of age in the Internet Era. The entire global universe of fabric was spread before her, so much so that the choices were paralyzing. I was invited on the adventure of sewing her wedding dress, and just as optimistic as I was two decades before, I encouraged her and we pulled out our sewing machines and plunged in.

It had to be silk, of course, with a massively full skirt. But also not pricey, because all the wedding money was allocated elsewhere. So we made the skirts of china silk scarves purchased from our favorite online outlet, Dharma Trading, where many good things come from. Two half-circle silk shawls and a silk sarong cut in half made the more-than-a-full-circle shirt. Beneath it she wore another more-than-full-circle skirt of a white embroidered cotton I had bought for the flower girls which she fell in love with and asked for. For a blouse, she purchased an inexpensive simple dress of silk from a designer in Japan who custom-made it when she found out it was for a wedding. 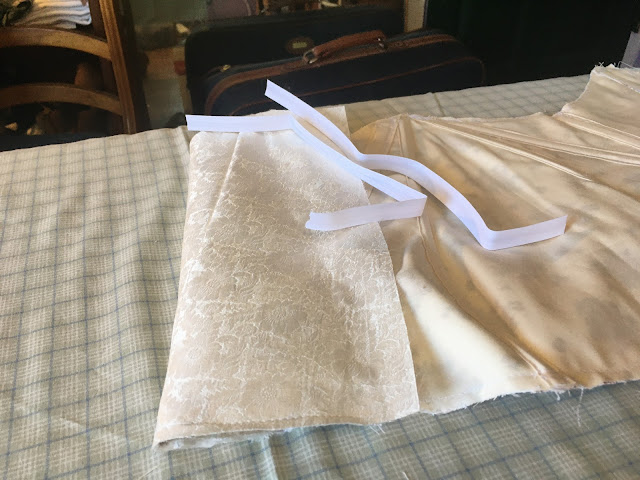 But the pièce de résistance was her corset. My daughter, inspired by reenactments, had made several corsets over the years and had become enamored at how efficient and comfortable a garment they are. She carefully made the lining and fitted it to herself. Then she bought exquisite white silk damask and worried over it for weeks before she dared to cut it. Carefully she fused it to lining to cut it, and for "something old" she lined it with a cotton canvas we inherited in a fabric stash from my grandparents. Laces had to be tea-dyed to match and boning made from zip ties (which she prefers over the ready-made sort) was carefully fitted into the sleeves. It took weeks and countless fittings, but she finally executed it nearly flawlessly-- the only flaws being the ones only the artist knows of. And we were all delighted when she agreed to wear her first impulsive purchase: an embroidered overskirt of iridescent polyester fabric (not silk, le sigh) which, though not visible from the front when she walked down the aisle, brought a riot of wildflowers into her train. The blue ribbon sash for Our Lady she took from our family Maypole.  Since the blues didn't quite match, a little careful artistry with a teal permanent marker altered flower petals and butterfly wings nicely. 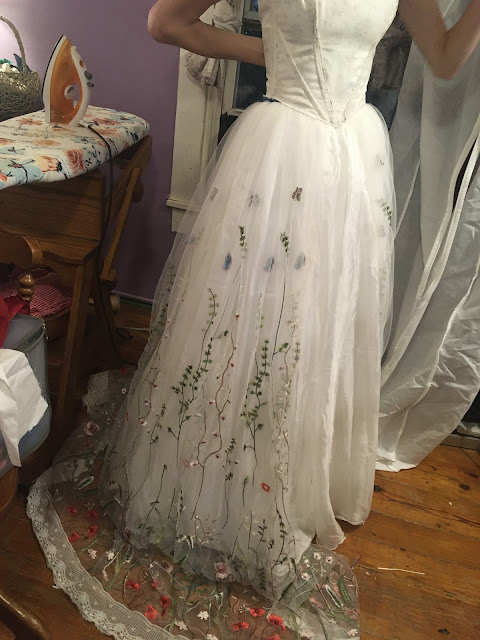 She wore beaded shoes from India and chose a silk chiffon scarf for a simple veil, wore my friend's freshwater pearl necklace with a shell cross from the Holy Land. Bridesmaid dresses of embroidered cotton - so comfortable and inexpensively found on Etsy - outfitted the female members of the wedding party. And flowers from my garden provided the bouquets. 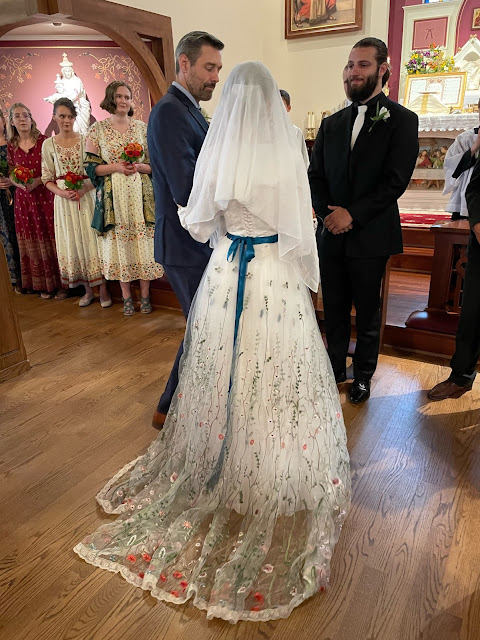 In the end, a wedding day is just a day: the marriage is the thing which sails forth in hope to last a lifetime. And yet, in the Catholic sensibility, it all matters: each stitch of the bridal gown is a prayer for fidelity, each ripped seam and re-sewn piece a plea for forgiveness, each adornment an aspiration for virtue. I am proud of my daughter for her choice of a husband, and I was delighted to be part of the long journey of preparation for the sacrament.  Although my wedding dress and hers are vastly different, they share the same spirit of culture creation, of not settling for the convention, and of choosing the adventure of orthodoxy. As my husband said in his speech at the wedding feast, quoting Chesterton: "Marriage is a great adventure, like going to war.... so now, to war! Live the adventure!"