Acknowledging a Debt to the Fisher King (2014) 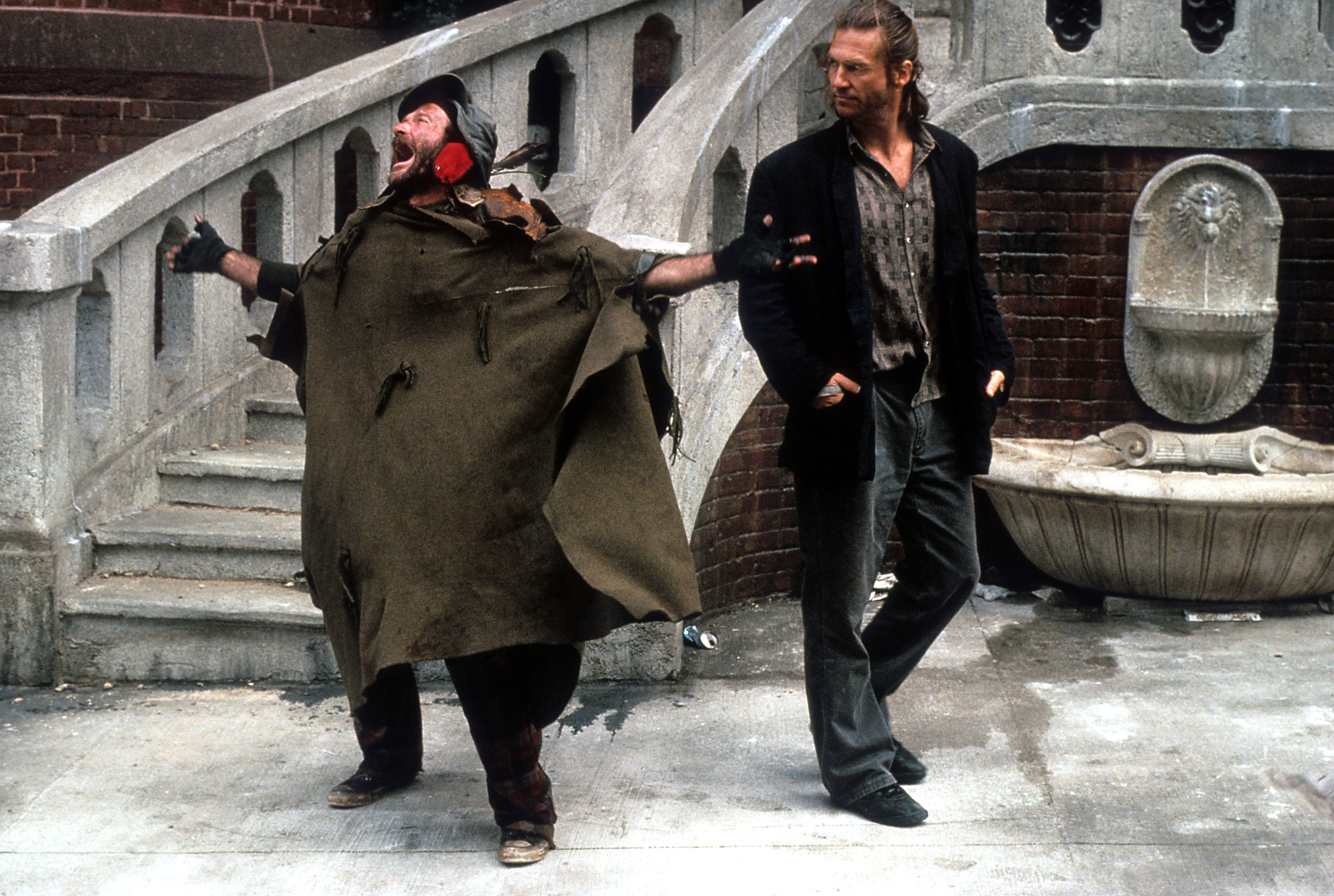 Stories are made of so many bits and pieces from a person's consciousness, some of them conscious and some of them so unconscious that their influence leeches subtly and powerfully through your mind. Upon the regrettable passing of the comic actor Robin Williams, I find myself reflecting on the movie he starred in which most impacted my life, The Fisher King, and discovering links between Terry Gilliam's masterpiece and my own first novel The Shadow of the Bear. It might make an interesting study to compare the film with my book, because I'm sure the debt is evident in many ways that even I am not aware of.
(Side note: this film contains strong language, crass language, adult situations, adult humor, and distressing scenes of violence. It is a good representative of what I would call a film for adults (as opposed to that hated euphemism "adult film," which really means a film for immature adults). The Fisher King is definitely not for children or young teens. But it is a good film for angst-filled young adults.)
The year was 1991. That year, I was a college student, a senior majoring in television production, and battling the most serious depression of my life. My survival tactic was to throw myself into my classwork, which as an upperclassman consisted of hours in the artificial light of the university's basement television studio, immersed in rearranging frames of video. I pressed out endless assignment papers, attended production meetings, and theatrical rehearsals, and did whatever else I could distract myself with, to hide the abyss gnawing at my psyche. The worst hour of the day was when the alarm clock went off, and I had to will myself to get out of the dorm bunkbed and face another empty day.
It wasn't surprising that my thoughts were bleak, subsumed in a morass of misery. Grunge was in, and it fit my mood. I was drawn to topics that dealt with despair, because I desperately needed a reason to keep on living. Into the midst of this, I went to see The Fisher King with my fellow TV majors, and was completely transfixed. So much so, that I went back to see it again the same week, significant for this broke college student.
The inciting incident in the story used two cross-currents in American culture. Howard Stern was making his fame as a shock jock, and American crime had entered that blurry period where mass murders by unhappy individuals had become a phenomenon, but before Columbine took it to the level of psychopathic fame. What could be causing this senseless violence? Was American culture itself responsible, perhaps even the makers of that culture? The Fisher King tapped that raw nerve of guilt as Jack Lucas, a shock jock played by Jeff Bridges, makes a glib comment to a mentally-unstable regular caller, and the man goes on a shooting spree in a New York City restaurant.
A despairing Jack attempts to commit suicide under a NYC bridge by tying cement blocks to his feet. But in a dark Chestertonian twist, he discovers a sudden desire to live when two young thugs take him for a homeless person and decide to set him on fire. But before they can murder him, Jack is saved by another madman, a Quixotic homeless man named Parry (Robin Williams) and his band of crazy knights. Parry sees himself as a modern-day knight on a crusade to find the Holy Grail, which he believes is hidden in the hi-rise apartment of a New York millionaire. "The Fisher King" of the title recalls a medieval legend bound up with the knights of King Arthur and the Holy Grail they sought.
According to IMDB,

The legend varies, but all iterations possess three elements: the Fisher King was charged by God with guarding the Holy Grail, but later incurred some form of incapacitating physical punishment for his sin of pride, and had to wait for someone to deliver him from his suffering. A simpleminded knight named Percival, referred to in the movie as "The Fool", healed the wounds with kindness to the king, asking him why he suffers and giving him a cup of water to drink. The king realizes the cup is the grail and is baffled that the boy found it, as demonstrated in the closing exchange: "I've sent my brightest and bravest men to search for this. How did you find it?" The Fool laughed and said "I don't know. I only knew that you were thirsty." Echoes of the legend recur throughout the film, but in a continually shifting manner, so that it sometimes appears that Lucas is Percival to Parry's Fisher King, sometimes vice versa, and sometimes that one or the other is re-enacting part of the story with another character (most obviously in Parry's self-assigned quest to obtain the Grail from the man he believes is its guardian). (from the movie's  spoiler synopsis)

I was fascinated by this dark film with its cast of misbegotten characters, ranging from Jack's city Italian girlfriend who runs a trashy video store to an emaciated transvestite singer, from the wheelchair-bound veteran Jack befriends to Parry's maiden love, a gawky lonely spinster named Lydia. But under the influence of Parry's mad and joyful vision, they become transfigured into something greater than themselves, enacting a story that brings healing and the restoration of sanity, albeit with a typical 90s tinge.
Beneath the grit and William's characteristic potty-mouthed humor, I remember the movie as a series of haunting vingnettes. The famous scene in Grand Central Station where the bustling crowd of commuters transforms into a ballroom of waltzing couples, as Parry's lonesome love, Lydia walks home from work. Jeff Bridges scaling the skyscraper in homemade armor. The chorus of madmen in the asylum celebrating Jack's triumphant quest.
And I love the first date scene, where Parry walks Lydia home, and she expresses her fears to him: that his infatuation is just leading to a one-night stand. Parry, clad in a white suit reminiscent of a white knight's, responds to her with a pledge of steadfast purity that is remarkable in William's career. Terry Gilliam is best known for his cynical Monty Python and the Holy Grail, but for a character in his film to give such a defense of chaste love is remarkable, and to me, unforgettable.
“Have you ever felt that there was something going on in life that not everyone was aware of? ...As though there's a story going on that everyone is a part of, but not everybody knows about? Maybe 'story' isn't the right word- a sort of drama, a battle between what's peripheral and whats really important. As though the people you meet aren't just their plain, prosaic selves but are actually princes and princesses, gods and goddesses, fairies, shepherds, all sorts of fantastic creatures who've chosen to hide their real shapes for some reason or another. Have you ever thought that?” my heroine, Rose, asks another homeless man, Bear, in The Shadow of the Bear.
Like Parry, she envisions a life where people's actions mean something, where people's identity reflects a deeper reality. She doesn't know that (like Parry), Bear has taken up the gauntlet in a modern-day quest which some people would consider mad.
And I find this other quote also reflects themes found in The Fisher King, when Bear tells Blanche, “Every once in a while you just have to decide to do something very crazy and very right--just to dare yourself to live. I don't mean doing something stupid and destructive--just something fun and good and beautiful.” I even find echoes of Bear and Blanche's dance to "Paper Moon" in Fisher King's emblematic refrain: "I like New York in June: How about you?" Somehow I felt my New York teen heroes just had to dance to big band somewhere in my story.
Madness and sanity is a large theme in The Fisher King. Most of the conversations about madness don't appear in my book, but they are touched on in the audio drama we later made, which features more conversations between the brothers Bear and Fish, who wonder at times if they are mad to keep on living in poverty in order to continue to track a murderer the police have long ago given up on finding. The transformation of Jack from a cynical angry man to a laughing knight on a mad mission probably impacted me the most. I am sure that the character of Fish owes something to Jeff's Bridges' Jack, but it takes two more books for Fish to set out on his own mad quest and win a sword.
In conquering depression, victory is won not by a few large victories, but through many small ones. Small acts of getting out of bed, choosing to smile instead of to zone, starting a chat with a stranger in need instead of sitting alone. Jack's road out of depression back to sanity is also filled with many little choices: steps forward and steps back. But since this is Hollywood, we do get to see a few of the grand moments caught on film too.
So during my own dark night of the soul, The Fisher King came like a spark of hope that even in a grim, profane, and savagely violent world, medieval-style quests and even triumphs were still possible. Love and sanity are precious things, frightfully assailed on all sides, but able to conquer. We need miracles, even the miracle of a good story. Two years after being struck and haunted by this film, I was living in New York, putting the finishing touches on the manuscript that would be my first published book, and about to meet the man who would become the love of my life, my own knight in fading blue denim. Reading
Rest in peace, Robin Williams, wounded knight. I pray you find your Holy Grail.
Email Post
Labels: #shadowofthebear