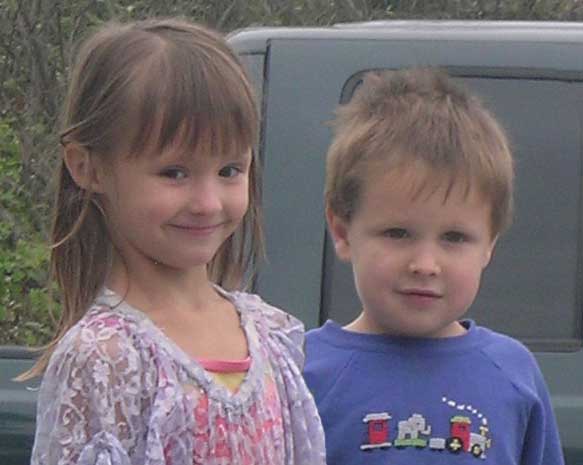 My almost five-year-old son Joshua died on July 8, 2006. Ten days later, his older sister Marygrace, who was seven at the time, woke up in great excitement and ran downstairs to tell me a vivid dream that she had just had. Here's my approximation of Marygrace's words below.

Marygrace told me that she had a dream about Joshua last night.

She said she was asleep and Joshua came down from heaven with a little girl and he said, "Hi Marygrace! This is our little sister Ann!" (We had lost a baby to miscarriage before we had my daughter Joan.)

And then there were a whole bunch of other children there, about twenty. They all wanted to play with Marygrace and Joshua and Ann. They sat in a circle and they played Duck Duck Goose. "And it was so fun," Marygrace said, "because there were so many children. You had to run a lot."

"Why were you doing sit-ups?" I asked.

"Because we were getting ready for a race, a very very long race. We had to do all sorts of exercises.

"We ran the race and it took a long long time. But then we won! We all won!

"And then we had a BIG party and everyone we know was there. Actually, everyone in the whole world was there. It was so much fun.

"And they had dress-up clothes and I wore a beautiful dress with a puff-out skirt, and I danced with a boy who was seven, who liked me. It was a beautiful dance."

I tried to imagine all of this.

"Remember that dream," I told Marygrace.   "It's important.   Remember it."


By the way, soon after Marygrace told us this dream, we realized that the feast day of St. Ann is the same day as Joshua's birthday - July 26.

Cynthia Sauer said…
Perhaps the race is our earthly journey, the excercise is our daily bread
and the big party at the end is the heavenly feast! Joshua was getting his
sister ready and through her all of us. Thank you for sharing this beautiful
Heavenly dream, Regina!