I apologize for having neglected this blog for so long (but aren't all blogs neglected these days in the drift towards Facebook and Pinterest?) but at times, a web log can be the perfect venue for making a public announcement, and this is one.

For those of you who have been waiting for the next book in the Fairy Tale Novel series, I have good news! The next Fairy Tale Novel is on its way, at last.  I can't tell you a lot, but here's what I can tell you:

As for the last item, the $20 price means we think it will be a book at least as long as Waking Rose, which is the longest and hence the most expensive of the Fairy Tale Novels.  However, the eBook will be $5, just like the other Fairy Tale Novels.

What else can I tell you about it? It involves new characters you've never seen before.  It takes place several years after Fish and Rose's wedding, and also after Paul and Rachel's wedding, which could mean that it's between four and five years after the events of Alex O'Donnell. (I won't get more specific so that I can change my mind if I need to.) Paul has a cameo in the book, and Fish appears as a minor character, often unseen, in several scenes, where he gets to be very Fish-like. (What a great guy he is.)

I also need to tell you that this is a more serious and heavier book than the others. The subject matter is harsher.  It's about premarital unchastity.  It's about an out-of-wedlock pregnancy.  It's about serious (ie: mortal) sin. It's probably not appropriate for 14 year old readers to read without their parents.  One reason why I've been holding off publishing this book is because I've been worried about you parents out there who have honored me so much by trusting me to entertain your young teens.  I don't want to violate that trust.

But these past few years, I've been having conversations with many of you parents, and many of you have encouraged me to go forward with this book.  Also, I realize that many of my readers have grown up. Some of you might have been 14 when you first read Shadow of the Bear, but you're in college now.  I feel confident that many of you will appreciate this book.

Why, you may ask, am I writing such a dark book?  Well, it strikes me that while there are quite a few books that focus on premarital unchastity from a girl's point of view, I don't know too many books that tell the story from the point of view of the guy.  That's what this book is about: it's about a prince who fails.

Read the original story of Rapunzel (the original Grimm's, mind you).  That handsome prince was no hero. He messed up: and messed up big time.  You've got a girl trapped in a tower by a witch. A prince discovers her. Why doesn't he rescue her? Isn't that a prince's job?  So why does he leave her there?

Notice how harshly he's punished: how hard his penance is, and how his beloved suffers because of his sin. And notice how the happily-ever-after only happens after he and Rapunzel are reunited and she forgives him.

We live in a world that doubts that men and women are much good for one another. Why else is the very definition of marriage being called into question?  It's because men and women are so exquisitely adept at wounding one another so very deeply. Given how deep that hurt can go, I personally can understand why some want to give up on the opposite sex altogether.

So is a fairy tale still possible in today's world?

I believe it is.  And that is what this book is about.

So I hope you will pray for me as I prepare this book for publication.  And I hope that when it comes out, you'll make sure it finds its way into the hands of the appropriate readers.  I'll do my best in the cover design to flag the book as a story for more mature readers. Tangled, this ain't.

There's a lot to be done: I need to do the final story edit, I need to get permission to use a beautiful poem by Carl Sandburg, and we need to do photo sessions with the models we've picked (yes, we already have our cover models!) and design the cover.  Anything could go wrong along the way and cause delays, so keep us in your prayers.

And I can take some more questions on the book, but I won't give out too many details yet. Remember, we haven't finished the final story edit.

I'll start out by answering a few other questions I've been asked quite a few times in the past year or so:

Q: When will you write/ why won't you write another book about Fish and Rose (or Blanche and Bear, or all four?)?

A: I don't know, because I don't have a really good idea for a new book about them yet. I know I would hate to write a bad or stupid book about them. (And I know you'd hate it even more!) And thanks to all of you who've sent me ideas and suggestions for new books, but none of them have kindled my imagination yet.  But I do promise you this: if and when I do get a good idea, I will write another book.

Q: What about the Fish book based on Rumplestilskin you promised, Goldspinner?

A: It's still in the works, but I haven't been able to work on it much, and the book on Rapunzel is already mostly finished. So we're going with Rapunzel Let Down first.  In order to do Goldspinner, I need to do some research, and since I haven't done it methodically, I haven't found out the answers I need to find. Yet. At some point I may get more serious about research and finish it, but that time hasn't come yet.  Plus, believe it or not, I have yet another series I want to find time to write.  The first book in that series needs to be written soon.  So, it may be a few years before another Fairy Tale Novel comes out after Rapunzel.

Q:  Why is all this taking so long?

A: Actually, none of you have asked me this directly: you are much too polite to do so! But I guess there is an answer why there's been a delay in the release of the next Fairy Tale Novel.  You know my editorial duties have taken up more of my time these past few years. I have loved being the editor of the John Paul 2 High series and I've enjoyed co-writing Catholic Philosopher Chick and the first book of the still-in-process Ruah Chronicles (see the Chesterton Press Facebook page for details). I also love my work editing for Manga Hero. But time spent editing is time not spent writing.  I love to edit and I need to edit: it's a passion, plus it's a job that pays bills.

The other big reason I am slowing down on my writing is that my family is larger. I no longer only have little kids crawling over my computer keyboard: I have (three!) teens of my own who will come up to me and say, "Mom! I need to talk to you about my life RIGHT NOW."  I love them tons and they won't be under my roof forever, so I need to spend time with them.  Also means less time to spend writing.  Right now.
But what is really good news for you is that these teens love my books and want me to write more. So don't worry: I won't be giving up writing Fairy Tale Novels.  It just might take me longer.

Q: So what did you think of the Disney movie Tangled?

So ask away ... on my Facebook page, on the Fairy Tale Novel Forum, and on this blog. I'll try to answer your queries as soon as I can.  If there's a delay -- remember, I take longer to do things these days, but blessed be the Lord, I'm still here.  Just not online.
Email Post

Rachel said…
Sounds awesome! Can't wait to read this book. Sounds like a great premise and I guess I never thought of the story like that. Love the idea and it's going to be fabulous. Thanks for all the fabulous books and will be buying this one as soon as possible.
September 26, 2012 at 8:56 AM

Unknown said…
I am so excited and can't wait for Rapunzel to come out!! I have a question: if Fish is coming back in this book, does that Rose will be in it too? Thanks!
September 27, 2012 at 9:52 AM

Victoria said…
Ooh, how exciting! You have my prayers that it goes smoothly, Mrs. Doman.

Do you think the book would be suitable for a slightly sheltered seventeen year old? Or is more for college-age girls?
October 4, 2012 at 12:51 PM

Samantha Joan said…
JMJ
I am so excited! God bless you and your work! It will definitely be interesting... can't remember the last time there was a Rapunzel story with a Catholic point of view!
December 5, 2012 at 2:25 PM

regina doman said…
Q: Will Rose be in it too?

A: Sadly, no. When you read the book, I think you'll understand why. You mainly see Fish when he's at work, and I doubt there's much he could or would tell Rose.

Q: Will the book be suitable for a slightly sheltered seventeen year old girl?

Unknown said…
Can't wait! I'm sure it will be as beautiful as the others. Thank you for continuing to write, it's hard to find books as wonderful as yours.
March 4, 2013 at 4:35 PM

Unknown said…
Can't wait! I'm sure it will be as beautiful as the others. Thank you for continuing to write, it's hard to find books as wonderful as yours.
March 4, 2013 at 4:36 PM 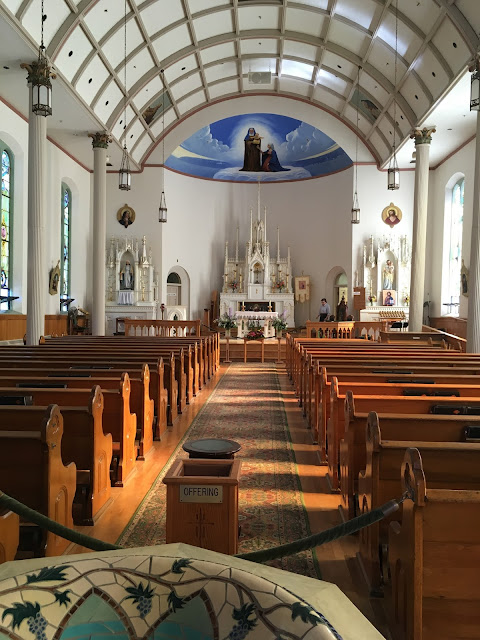